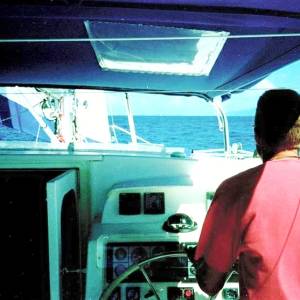 It was back in the year 2000...wow 20 years ago that I had my first taste of Multihull sailing and living aboard !
After applying for a job at certain well known Charter company in the BVI myself and then partner were accepted to run a crewed yacht. We were due to be given a 50ft Jeanneau to run and live on however things changed shortly before and we were told it was now a Cat were to be given.
A Cat !! I was horrified !! I was from a racing background and the thought of something that did not sail properly was simply terrible. Well we accepted as the pay was more and tips likely to be better.

Well we arrived and the first impression was OMG this huge how am I going to drive it?
It was a baptism of fire as I had been upgraded to a Cat because this one had been used as donor boat for parts for a few months and given I had been a mechanic in my previous carreer I was given it to sort out, and I had 7 day before first charter.
It needed moving from a vert tricky berth, first attempt is when I discovered there was problem with the STBD engine and cut out and would not start and had dock my first Cat drive on 1 engine.

The first few days were busy with repair but I was loving the accommodation and comfort, even in the marina other monohulls would roll near the entrance and we were undisturbed. Plus I had one very happy partner as the big cooker, huge fridge/ freezer, AC, and large double bed was much to her liking, making my life somewhat easier !
Eventually we got out to explore a day before charter.
What a surprise the Leopard 4500 was so manoeuvrable in the marina with it 55hp Yanmars and max props I was amazed. It was quite a breezy day so I had a reef first off, however after a few hours of getting confident with the Cat we had full sails.
Wow this thing actually sails ! and has some feel in the wheel, stable and a great turn of speed. My whole Cat prejudice was disappearing quickly.

Well the first charter was not so easy but the Cat was amazing, my partner loved it, living and working on the stable and comfortable platform was a joy after trying work at a angle. It was described as going from being on camping trip to living in a floating apartment.
I think our time working as charter crew would have been much shorter if in monohull as its that much harder.
It made life so much easier being on the Cat we could deliver a better experience to our clients. The ability to be on anchor in most places and not worry about rolling all night and the fact we could get in close with shallow draft to improve further the comfort factor. The ability to carry a proper size RIB with 25hp meant every time we needed to go somewhere / drop guests etc we did not have to move the boat, and it was otherwise known as the company car. It was important as anchorages and mooring balls would get taken early. You could also layup for dinner outside and rainstorm for 8 people and be completely dry and comfortable, it was great.

As time went on we had newer Leopard 4500 and I was on the management team helping new crew with maintenance advice. These were excellent Cats very few problems and simple to maintain. They were built in South Africa and delivered on there own bottoms by delivery crew.
They could reach speeds of 10 knots up wind, and I remember polishing the coachroof sides and partner cooking while the Cat was happy on the autohelm downwind at 12 -14 knots going from St.Martin to BVI.
I experienced some good winds at times, once we had a deep tropical storm and over 50 knots of breeze and another outrunning a potential hurricane BVI - Grenada but always had full confidence in there ability.

After few years of running Cats we moved to larger powerboats , however I still preferred the Cat and was total convert after my initial naive thoughts.
Many of these Cats later left the charter fleet and ended up on many circumnavigations in private hands.
Cats are a great way to adventure in comfort and it was a fantastic time I remember dearly, with lots of good friends still in contact from our time in crewed yachts. 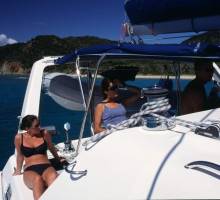 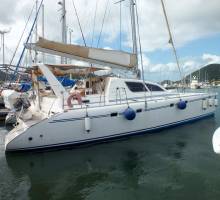 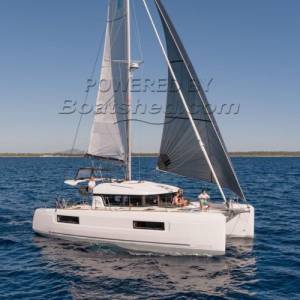